For 150 years, the UW Law School has been at the forefront of legal innovation. As a nationally acclaimed, intellectually exciting law school, UW Law attracts students nationally and internationally.

While much has changed over the last 150 years, the hallmarks of the University of Wisconsin’s law training remain steadfast: 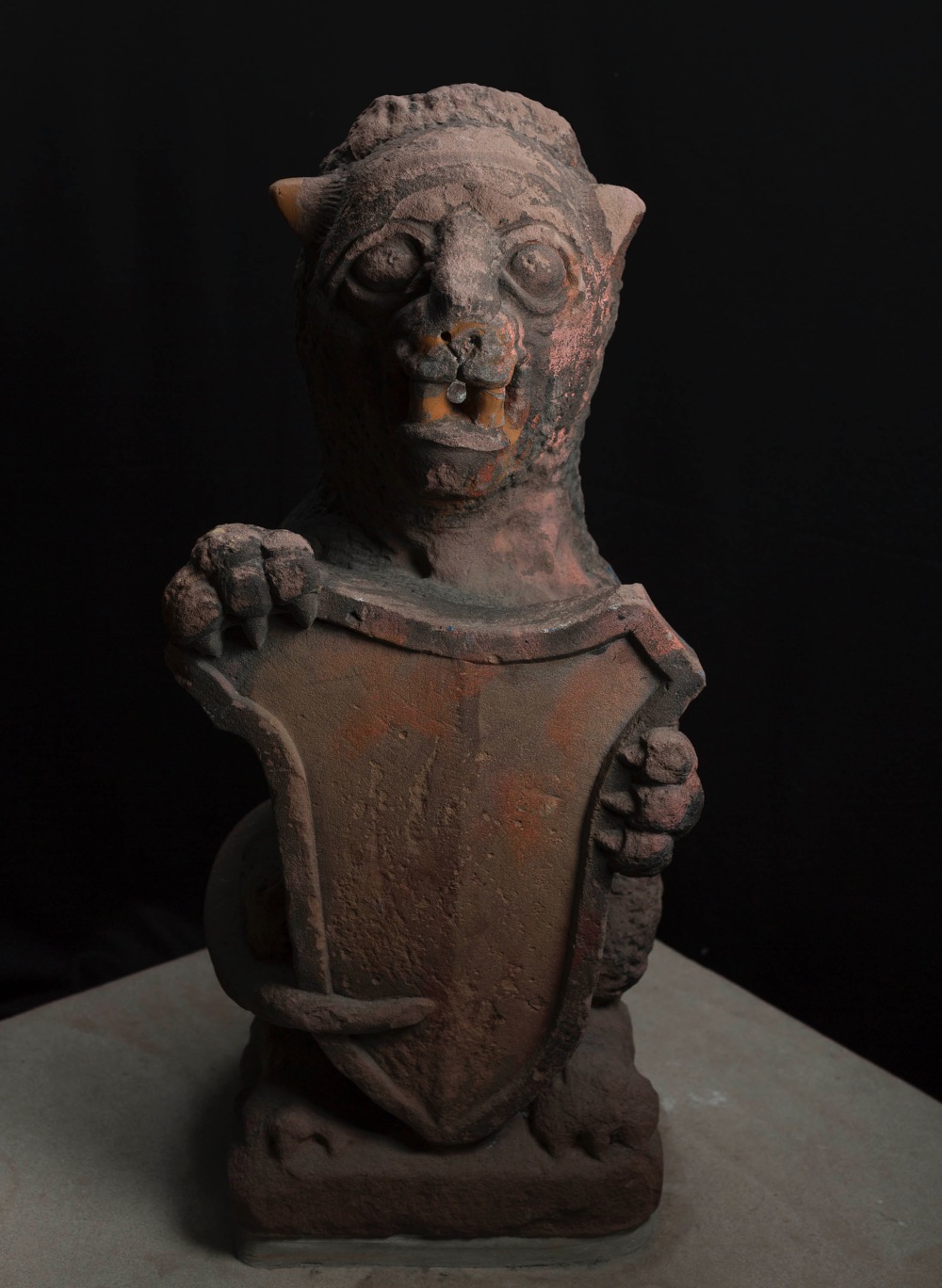 In 1963, when the existing Law School was demolished to make way for a new building, Law School Dean George Young found and rescued a sandstone gargoyle from the rubble. This figure and its departed twin had sat on the roof of the 1893 building for almost 70 years. While one of the pair perished in its fall, the second landed unscathed.

That rescued gargoyle, which is now permanently installed in the Law School's atrium, represents the indomitable strength and spirit of our University of Wisconsin Law School and its many graduates.

More about the Gargoyle

Gargoyles originally appeared on French gothic cathedrals. From the beginning they had at least two purposes: many were made with open mouths that served as drains to divert rain water away from the building's foundations. Whether they carried water or not, their second purpose was to scare away evil spirits. While gargoyles were often grotesque, stone carvers also honored friends and relatives by carving their faces on some gargoyles. Ours does not have a recognizable face, nor was it ever used to divert rainwater, but it clearly worked to keep away evil spirits - hence the good fortune of our School and its graduates.

Concern for the Gargoyle's future led us to have a mold made with the help of the Art Department.  From the mold we have cast two concrete replicas which can make guest appearances if the "real" Gargoyle is otherwise occupied.

In the years since Dean Young rescued the original, the Gargoyle has become the symbol of the School: it lends its name to our alumni magazine, it graces the cover of the Wisconsin Law Review, and its image has been applied to ties, coffee cups, tee shirts and even wrist watches. While few would call it handsome, its strength, longevity and good fortune are appropriate to lend to one of the oldest and finest law schools in the country. 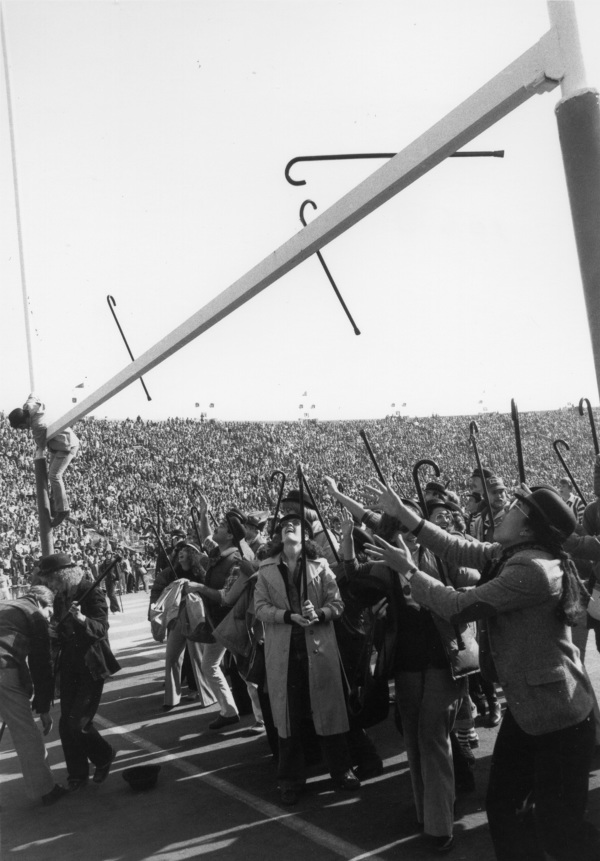 It’s a longstanding — but legal — ploy to predict the future when soon-to-be lawyers attempt to throw canes over a Camp Randall goalpost and imagine winning their first cases.

One of Homecoming’s biggest spectacles doesn’t involve the marching band or the football team. It’s hundreds of third-year law students with canes charging down the field toward Camp Randall Stadium’s south end zone before kickoff. Some of the future attorneys sprint like running backs going for a touchdown. Others stroll or strut, swinging their canes, to savor the moment and avoid the crush.

When they arrive in the shadow of the Field House, students toss their canes over the goalpost. It’s a decades-long tradition that holds that catching their canes means they’ll win their first cases after graduation. Drop them and they lose.

The origins of Cane Toss seem lost in the mists of time. Most believe that the tradition was begun with the arrival of the legendary Professor William Herbert "Herbie" Page from Ohio State University Law School in 1917. One report indicates it originated at Harvard University and showed up here in 1910. In 1921, the Capital Times reported that senior law students voted to carry canes on campus.

Some research suggests that a cane parade tradition may have existed at Ohio and was simply transplanted here. In a centennial history of the School written in 1968 by Scott Van Alstyne (68 WLR 329), Page is quoted as denying that he had anything to do with the origination of the parade. He suggested that it already existed here when he arrived.

Regardless, the cane parade and Herbie Page became inseparably linked during the 1930's. During these early years, the entire Law faculty accompanied the senior class and the parade actually took place between halves of the game. According to a story in a 1953 issue of the Daily Cardinal, with the reduced size of classes during the Depression, the faculty soon outnumbered the seniors, and the senior member of the faculty took over the responsibility of leading the parade. Exactly when Herbie Page became "senior" may be debated, but he relished the duty and led the parades through 1951.

In the Law Review article noted above, Page claims that he volunteered to lead the parade at a faculty meeting when "problem[s]" associated with the parade were being discussed.

In 1952, Professor Page was hospitalized with a broken leg. Without a leader, the Class of 1953 nevertheless found the north goalposts. Professor Walter Raushenbush, Class of 1953, remembers his own cane parade but also remembers participating in the Homecoming activities in the fall of 1951, as a second-year student.

After Professor Page's death, Professor Ray Brown assumed the duty of leader. In 1953, the Student Bar Association found a Model T with which to deliver Professor Brown to Camp Randall.

By the time George Young became dean in 1958, custom dictated that the Dean should lead the parade. Dean Young approached his role with great spirit. One of Dean Young's prized possessions was his own cane emblazoned with a small brass plaque for each of the twenty-two years he led the parade.

For a period in the 1960-80's, the parade was joined by one or two strange characters, wearing gorilla masks and long black coats. These interlopers would slowly trail the senior class and then disappear into the crowd.

Each dean has established his own ground rules for the parade. Dean Bernstine was fond of saying that he was first through the gate to the field, then headed straight for the sidelines to avoid being crushed by the mob that followed.  Professor Cliff Thompson also enjoyed the parade. When asked to comment for this article, he indicated that he "hasn't missed one since coming here in 1983." Those who know Professor Thompson may be skeptical: after leaving the deanship, he taught as a visitor in several other states and spent five years in Indonesia. It was suggested, however, that he flew back for each Homecoming and that he often appeared "in costume," perhaps explaining those gorilla masks. Professor Thompson also may have been responsible for a modification of the old tradition: it is now said that, if the cane hangs up on the crossbar, the senior's first case will be settled to the satisfaction of both sides! 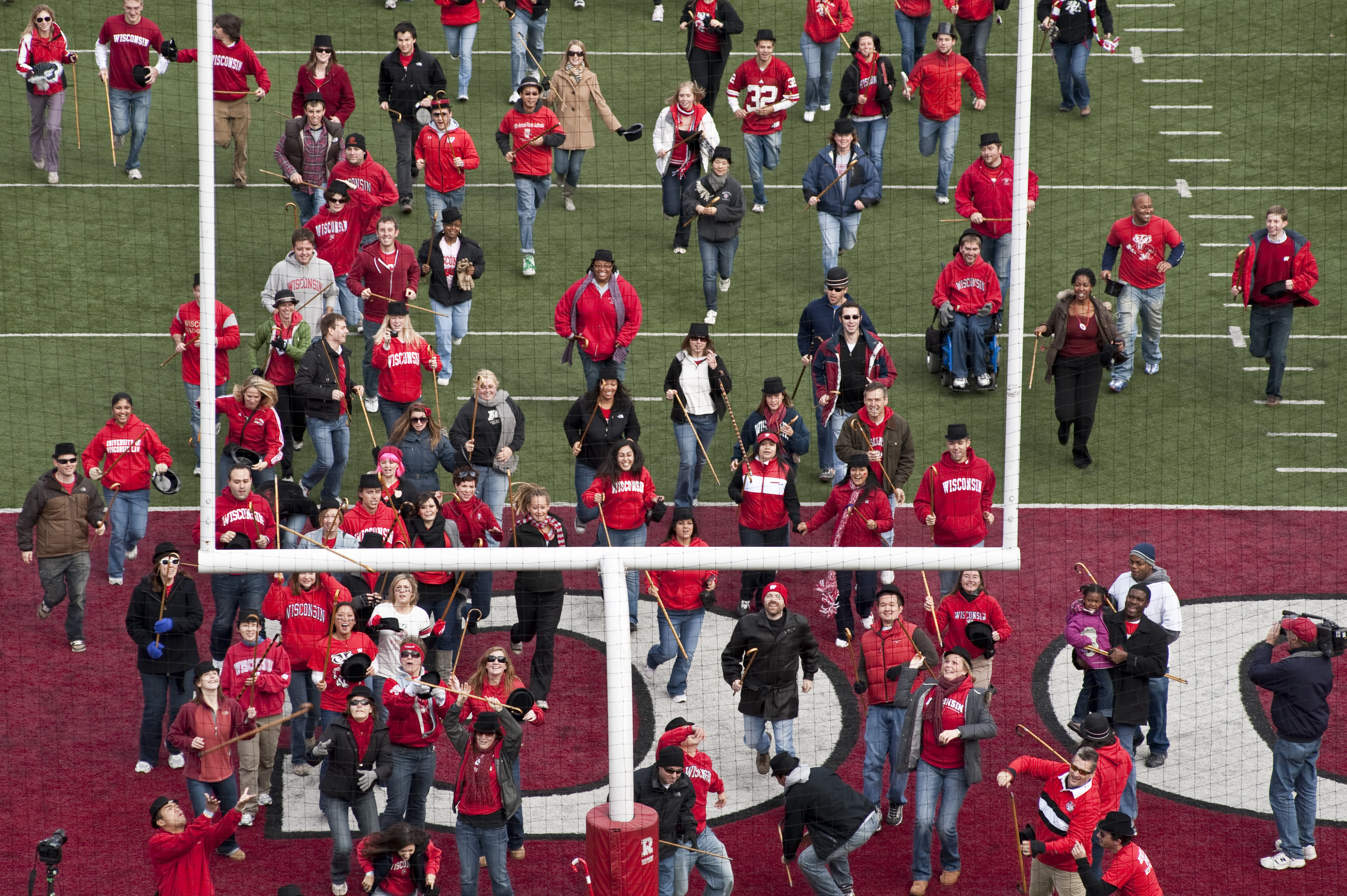